Harvest began this week, similar to the old days of cool climate harvests in the Willamette Valley—only difference being the intensely hot summer preceding it. The heat gave full ripeness to the fruit, despite a large crop load and a plodding start to the growing season. I love making East Coast friends drool when I tell them our August average high temperature is 82F with low humidity. This year our August highs averaged 89F—a big time difference.

The crop load is large this year, averaging 3.56 tons per acre in projections after dropping fruit to ensure proper ripening and balance. With part of the additional yields, we will produce some more Rosé as we jump production to 1,500 cases.

Rains are in the forecast, but that’s old-school Willamette Valley winemaking, not to be feared. White-haired experience gives us patience. We don’t flinch and pick just because weather services predict rain of some indeterminate amount. We have the benefit of knowing deep-rooted, mature vines are virtually immune to rain effects.

We currently have soft, rich, deep, flavorful, plentiful, bright and clean fruit. Good characters to see, with one-quarter of our fruit now picked!

The warmest vintages we’ve ever seen in the Willamette Valley over our more than 50 years of grapegrowing are the last five. Period.

We live in a bona fide cool climate here in the Willamette Valley. It’s why our wines have a great acid backbone that gives the wines a brightness of fruit and makes them perfect for aging and ideal with food. UC-Davis’ Winkler classified warmth and coolness by accumulating the recorded heat by growing season for the world’s wine regions. The Willamette Valley is designated Region One, the coolest, in company with Germany, Champagne and Burgundy. Harvest 2017 is happening now, when it traditionally has occurred, beginning the last week or so of September and lasting until the first few days of November. Timing is reassuring since last year’s harvest began in August—freakily early. At first, 2017 looked like an extreme opposite to 2016, with very late budbreak and bloom, following a wet rainy season where 150% of average rainfall filled soils.

However, abnormally warm and dry months then took 2017 from being only 10th warmest of 21 most recent vintages on June 1, to now being 4th warmest, accumulating the 3rd highest heat historically in the June to mid-August timeframe and THE highest heat mid-August to mid-September. Very high temperatures this year were the norm, with no other year showing more days over-90F days and only 2015 having more days above-80F.

Our typical pre-harvest inch of rain, which serves to equilibrate fruit chemistries, brought 1.7 inches of rain in mid-September. The rain coincided with cooling weather, seeing 67F average highs over the last 10 days, compared to the prior two weeks’ 87F. These conditions are a welcome sign for preserving acids. 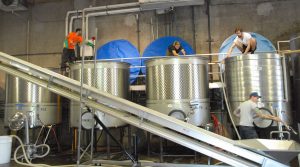 Three generations of the Ordaz family taking a break from picking at Ridgecrest.