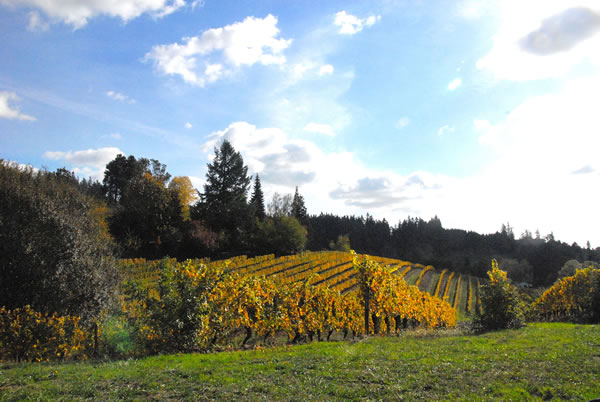 Here, have a cigar!  We just had twins, one year apart.  The 2015 vintage was slightly different in early growing season timing from 2014, but the final effect was the same, with big heat, big crop and big expectations.  Having just pressed out our final two Pinot Noir fermentors on October 22nd we have the same color, beautiful fruit, concentration, and suppleness as we saw in 2014.  The acids were down significantly, the alcohols are slightly over 14% on overage and the work Wynne did to minimize over-extraction resulted in more elegant wines than a hot vintage deserves. Not much different from 2014.

In addition to the extra fruit from leaving more grapes on-vine in order to give the plant extra work to do and push harvest further towards normal, projections were 12% understated when the dust settled, meaning we made 150% or more wine than we did on average 4-5 years ago—this with 10 acres fallow for replanting or no longer used by Chehalem!  The fruit was, as in 2014, impeccably clean and devoid of disease, with only a little sunburn being tossed from the sorting conveyor.  Whites again look fully ripe, texturally rich, and yet balanced.  Pinot Noirs will rival 2014 for rave reviews.

With the recent extremes of two very cool vintages in 2010 and 2011, followed by four progressively warmer vintages into record territory never seen before, we have to be skillful at adaptation, thankful for living in a “cool” climate. The vintage variations have and will be exciting, but we’ll have to learn to count higher—more heat, more fruit, more more.

Rain has finally begun falling today, a good thing since this year was drier than normal.  We’ve been done with picking since October 9th (5 week harvest duration) and we need to start replenishing soil moisture.  Weather during this year’s harvest was cooler than 2014, meaning the warmer growing season (earlier warmth and slightly higher temperatures) was mitigated by the gentler final ripening.  Being cooler also allowed us to keep some fruit hanging while we turned fermentors to make room for the record harvest.  When it all shook out, the end of October Cumulative Degree Days were equivalent for the years (at this point anyway).